This is a 6-monster bestiary, with instructions on how to remix the 6 into a multitude of creatures for your old-school D&D campaigns. The stats provided cover months of low-level play without use of any other bestiary. These instructions smoothly supplement other bestiaries too, providing broad, applicable principles for creating your own spins on existing monsters.

ALSO this is a 1-page dungeon about an archaeological dig that has been taken over by cockatrice-taming bandits that shows the utility of the aforementioned bestiary and treasure generator.

This project was inspired by a blog post from Jack Guignol of Tales of the Grotesque and Dungeonesque, quoted in part below:

“So, the characters in your old-school Dungeons & Dragons game go somewhere you haven’t yet prepared and you describe some cool, weird-ass monster that you don’t actually have stats for…

…I just use the stats for a bear and no one is the wiser. Re-skin appearance, methods of attack, and add special abilities on the fly if you absolutely must…but when in doubt, just use bears.”

It made me think about core lessons that early Dungeons & Dragons monster design tried to teach players, and subsequent discussions on Discord resulted the following question (typos and all):

I took inspiration from the game Bandits & Basilisks, a famously minimalist OD&D-retroclone with only the stats for bandits and basilisks in its bestiary section. In my minimalist bestiary, the bandit was replaced by the far-superior skeleton (it teaches a GM how to make basic mooks like bandits and goblins, AND it teaches them what traits an undead has in D&D at the same time, AND it produces a more morally unambiguous target to kill... THREE birds with one stone! Skeletons are so great squee-)

This project took me to wonderful places - through B/X monster variations between Holmes, Moldvay, and Mentzer, as well as the AD&D 1e Monster Manual. Through both tabletop and videogame implementations of D&D monsters. Through multiple late-night conversations with others passionate about monster design on Discord.

It really grew legs when I realized that players would get more out of this if there were also a minimalist treasure generator, inspired by Enter the Gungeon's easy-to-understand loot. To achieve this, I worked backwards from B/X treasure calculations (Adventurer Conqueror King had a lot of this math done for me already) and Blog of Holding's now-depreciated game, Dungeon Robber. At the end of the day the treasure generated is still very much D&D, so you probably won't see the outside influences unless you really squint, but credit where credit is due.

Finally, I created a one-page dungeon to showcase the power and utility of this minimalist package, and how one could use it to populate a space with denizens both generic and custom-made.

It is my dearest hope that I've created a robust tool that you are able to leverage in your games, convenient to use both digitally or as a printout while refereeing or Game Mastering. 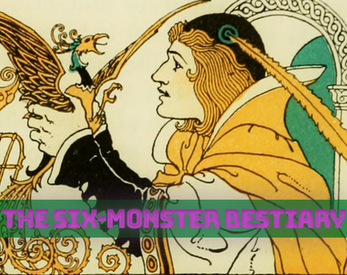