Please check back for update history!

Red Box Rogues is a handbook for players and referees of Old School Essentials, a game that I will use Gavin's own words to describe:

A role-playing game of fantastic adventure, where players work together to overcome fearsome monsters, sinister plots, and deadly traps in search of wealth, power, and glory.

This supplement was initially inspired by the 1977 boxed set of our favorite fantasy role-playing game, written by John Eric Holmes. I opened this all by trying to fit Holmes' magic-user into OSE, as I believed that Holmes had unique insights to the flaws of the magic-user and how it felt in play which neither Moldvay nor Mentzer felt needed to be fixed.

Specifically, Holmes recognized that the rules of OD&D "placed great limitations on the magic-user's power"...enough so that he was compelled to include ways to partially overcome these limitations through scroll-scribing procedures, available to his magic-users even at 1st level. These changes were undone when Moldvay and Mentzer wrote their rulesets. I sought to restore Holmes' magic-user.

As I gained more confidence in laying out a document in the beautiful style of OSE, I found that I couldn't stop at 1 class, and this product is the result.

Included are the following:

The product this was made for, Old-School Essentials, can be found for free here: https://www.drivethrurpg.com/product/272802/OldSchool-Essentials-Basic-Rules; you can find the rules for higher levels here if you need them.

This is meant to be entirely compatible with the core rules, and does not require the Advanced Genre rules to play. Please enjoy my humble submission.

So this is easily my favorite OSE product I've seen, this is really good stuff!  If you ever make a print version I'd be happy to purchase!

I am looking to make my own versions of the various Demihuman and Advanced classes for my playgroup with the save and Thac0 progression you use in RBR. Since RBR classes are generally buffed compared to the core classes, I was wondering if you could give me some insight on how/why you buffed across the classes so I could apply that to my own stuff, if that makes sense?  Thanks!

The decision to start fighter-riffs at 18[+1] was inspired by playing Lamentations of the Flame Princess, where fighters are just noticeably better at fighting even at level 1, before any Experience gets integrated into a character. I think that today's gaming environment (be it 5e or OSR) is so much more focused on pick-up games and short campaigns rather than these multi-year megadungeons from the 1980s that having early differentiation is really important.

You'll note that I adjust languages to not be INT-dependent, but just have them be appropriate for the campaign. I think in general it's silly and culturally reductive to tie languages down so much to class rather than to campaign setting. In our real world, we have societies that have always been multilingual in parts of Europe and the Middle East, as well as societies that basically only have one language. I think fantasy worlds should be free to have that nuance too, without INT-locking.

One thing I do in my design process is that I start all my classes in Excel (or any other spreadsheet program), so that I can compare Experience Curves, Hit Dice, THAC0, and Saves to each other, side-by-side. Spreadsheets are a powerful tool to help me identify patterns, break patterns, and the like. I even do this for base game classes, so that I have a reminder of what each edition of D&D has changed - for instance, did you know that the OD&D magic-user's EXP curve scales completely differently from the B/X magic-user's EXP curve? Seeing trends like that as clearly as possible helps clarify what sort of decision-making you need to make for the final product.

Excel also makes it easy to double-check if my conversions are what I want them to be - you'll notice that I moved all the d100 thief skills to the d20, copying what Adventurer Conqueror King did. I think that this may reduce coherency to new players because it's easier to think in percent than in d20's 5% increment buckets, but it means fewer dice that the player needs to keep track of, which is a plus for me. Anyway, Excel helps me double-check calculations quickly if I need to.

My final note is...just make sure that when you apply a mathematical shift, you apply it as consistently as possible. Example: my Cleric+ class has spells at level 1 (again driven by the fact that our play culture has changed and a lot of people may never level up their cleric in a pick-up game), and I didn't want to just have that single change. I also didn't want to take the Labyrinth Lord approach, where the spell progression is completely changed from B/X to be something more AD&D-inspired.

So, I wrote out an algorithm for how the base spells for the cleric would improve past L1. I think it was N+ceiling(N/4)? So yeah, doing something like this doesn't make your design more "valid", but it does make it reproducible if you want to build, for instance, multiple classes with whatever your new scaling is compared to the original one.

This is really helpful, thank you!

For the thief's new backstab progression how is the damage calculated? Are strength and magic modifiers multiplied or are they added after?

The new backstab progression is inspired from Advanced D&D 1e and OD&D Supplement I, so I'll use those two as the basis of a formal, legalistic answer. On page 27 of the AD&D Player's Handbook, back stabbing is described as follows:

"Back stabbing is the striking of a blow from behind, be it with club, dagger, or sword. The damage done per hit is twice normal for the weapon used per four experience levels of the thief, i.e. double damage at levels 1-4, triple at 5-8, quadruple at levels 9-12, and quintuple at levels 13-16. Note that striking by surprising from behind also increases the hit probability by 20% (+4 on the thief's "to hit" die roll)."

Whereas in Supplement I:

My understanding then is that you would multiply only "the damage indicated by the die", and then apply modifiers afterward, legalistically.

However, I have encountered GMs both old and young who run it as "calculate damage as you would normally, then multiply", and even GMs who include magical modifiers.

Ultimately, due to how risky the backstab maneuver is and how rare it is that players will opt to take the risk, I personally prefer to rule it in that method - with all modifiers applied first, then multiplication, for the greatest possible damage.

I don't think this is supported by the rules-as-written.
But this is the OSR! We do things as we like, and I encourage you to experiment and adjust to the taste of your own players :3 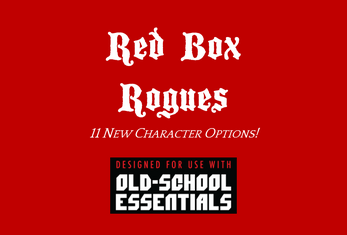